Giorgos Alkaios & Friends came out the clear winners in this year’s Greek national final, held on 12th March in Athens. With the song “Opa!”, written by Giorgos Alkaios himself with lyrics by Giannis Antoniou & Friends, Greece will be competing in the 1st Semi-Final on 25th May, at spot #13.

In an exclusive interview with escradio.com, Giorgos Alkaios spoke out about the spirit of “Opa!”, the competition in the contest and the stage performance in Oslo. If you missed the broadcast, you can listen to the interview here: [audio:https://www.escradio.com/wp-content/uploads/2010/04/Giorgos-Alkaios-Greece-interviewed-by-Matthias-Petermann.mp3|titles=Giorgos Alkaios (Greece) – interviewed by Matthias Petermann] Read more and check out the “Opa!” preview clip…

Giorgos Alkaios & Friends came out the clear winners in this year’s Greek national final, held on 12th March in Athens. With the song “Opa!”, written by Giorgos Alkaios himself with lyrics by Giannis Antoniou & Friends, Greece will be competing in the 1st Semi-Final on 25th May, at spot #13.

In an exclusive interview with escradio.com, Giorgos Alkaios spoke out about the spirit of “Opa!”, the competition in the contest and the stage performance in Oslo. If you missed the broadcast, you can listen to the interview here:

“Opa!” is Greece’s 31st entry at the Eurovision Song Contest. For more info on the Greek representative for Oslo 2010, see below please.

Check out the preview video clip:

Giorgos Alkaios Vassileiou was born on the 24th of December in 1971 in Athens. His Zodiac sign is Capricorn. The half Greek half Portuguese singer/performer moved to Boston shortly after his birth, where he lived until the age of three. His artistic tendencies showed up at an early age, since all he cared about was music.

His first contact with music and performance, happened at the “Charoumeno Chorio” (Happy Village) , a boy scout camp at Varybobi. He participated for 4 years as a boy scout and later on as Team leader in all musical and theatrical performances.

His first television appearance was in 1989, when he appeared at “Ela sto Fos” (Appear in the limelight) on The National Channel 2. In essence it was the first TV reality song contest, since out of the 1500 competitors that was comprised of young actors, singers and dancers, only 20 of them were selected. Amongst them was Giorgos. There he studies dancing with Daniel Lomel, acting with Niki Triantafyllidou, and music with Giorgos Chatzinassios. There, he also learned a lot from his experiences with great artists such as Minoas Volonakis and Lakis Lazopoulos.

In the summer of the same year, he makes it to the cast for Minoa Volonaki’s play “Antigoni” by Sophocles, whose star was the memorable Aliki Vougiouklaki, and which the music was composed by the great Miki Theodorakis.

The rehearsals lasted 2 months for the preparation of this theatrical tour, whose starting point was the legendary Ancient theatre of Epidaurus, one of the greatest experiences a 17 -year -old could experience .At that same point Giorgos decides to shift from the world of theatre to that of music.

In September 1991 the musical composer Avet Kizirian takes part at the Thessaloniki Song Contest with the song “Den Me Theleis Tolmiro” (You don’t want me to be bold), and of course chose Giorgo as the singer that would perform the song. It was at that time that Giorgos renamed himself from Giorgos Vassileiou to Giorgos Alkaios. He goes on to win first prize in that prestigious contest, and that’s where his musical career lifts off. Upon his return to Athens he is offered a 4 year contract with Sony BMG. 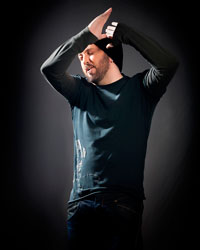 His first Pop Success and Discography

Giorgos, didn’t limit himself to just performing the songs of his first album, but was an active participant to the composition and lyrics, thus giving him the opportunity to compose music and write Lyrics for other artists.

Some of which were Alexia’s “Ksypnai o allos eautos mou” (My other self wakes up), a song that was used as the theme song to a famous soft drink company, and Notis Sfakianikis’ “Deftera Cheria” (Second Hands) and “Pes to na Pethano” (Tell me to Die). Songs that were very successful and to this day are still enjoyed since they have now become classics.

The then head of Sony BMG Miltos Karatzas, releases Giorgo’s first CD titled “Me Ligo Trak” (Slightly Nervous) having trusted the lyrics department to Evi Droutsa. The song “Ti -Ti” (What -What) makes a big impact at the Greek music scene, since it’s the first song that incorporates the traditional eastern sounds with the fresh Pop attitude, something that changed the musical standards of the time.

Since then 6 more albums were released, all of which offered chart topping success, giving Giorgo 3 Platinum Records and 5 Gold Records. The black cloth wrapped around his hand becomes his trademark for the next 5 years. He’s the only Greek Artist to turn his fetish into Fashion.

His constant rising success, in combination with his modest character was the reason that after his contract ended with Sony BMG, he had offers from all major Record companies. The new renovated Sony BMG was the one that managed to keep him in its roster, from which it releases “Ichi Siopis” (Sounds of Silence). There, the ‘new’ Giorgo shocks fans with his new extreme photoshoot and new look. In less than 24 hours the album goes gold. Four record releases follow, of which 2 of them go platinum, and all of them of course go gold.

In 2003 when the 2 preceding contracts with international Record companies ended, he decides to sign a contract with a Greek Record Company, ALPHA RECORDS. It gave him the chance to be more creative with his music, which was what convinced him to join them in the first place. This, along with the first album released from ALPHA RECORDS was turning heads, due to the fact that the packaging resembled that of a DVD (something that was never done before). In 2004 he releases a special edition CD from the same record label. It had 12 new songs and a 2 hour DVD that depicted his entire musical career. It included his biggest hits, video clips and amateur footage from his concerts and also famous personalities/friends talking about him.

In 2006, Giorgo  meets once more with Miltos Karatzas , but this time under the roof of Virus Music with a 2 year contract. At that time Giorgos also starts to ponder the thought of creating his own record label, something that didn’t take long to materialize.

In November of 2008, Giorgos Alkaios and his good friend also famous and talented singer Dionysis Schinas create their lifelong dream ‘Friends Music Factory’, an audiovisual and printed media company. Their forward thinking – staying ahead of the times attitude, helped release CD’s in a package that would enable them to be sold in newsstands, and bookstores besides the traditional record stores. This enabled them to sell their products from 14.000 locations instead of the traditional 180 spots that were the big record stores that were all where the CD’s were being sold. The forward thinking attitude did not stop here. They also set the price of the package to an unheard price of 9,90 Euros. These moves were soon adopted by the other major labels.

“To diko mas paramythi” (Our Fairy tale) was Giorgo’s first release from his new record company. It included a surprise collaboration with Areti Ketime in the song “Ama de se do” (If I don’t see you). With this track Giorgos and Areti manage to create a bridge between Commercial Pop and Artistic Pop.

Giorgos Alkaios, throughout his career has also scored the theme song to countless TV shows and series, most of which grossed high ratings, along with the theme song of Alpha Channel during the time it was bought by Dimitri Kondomina.