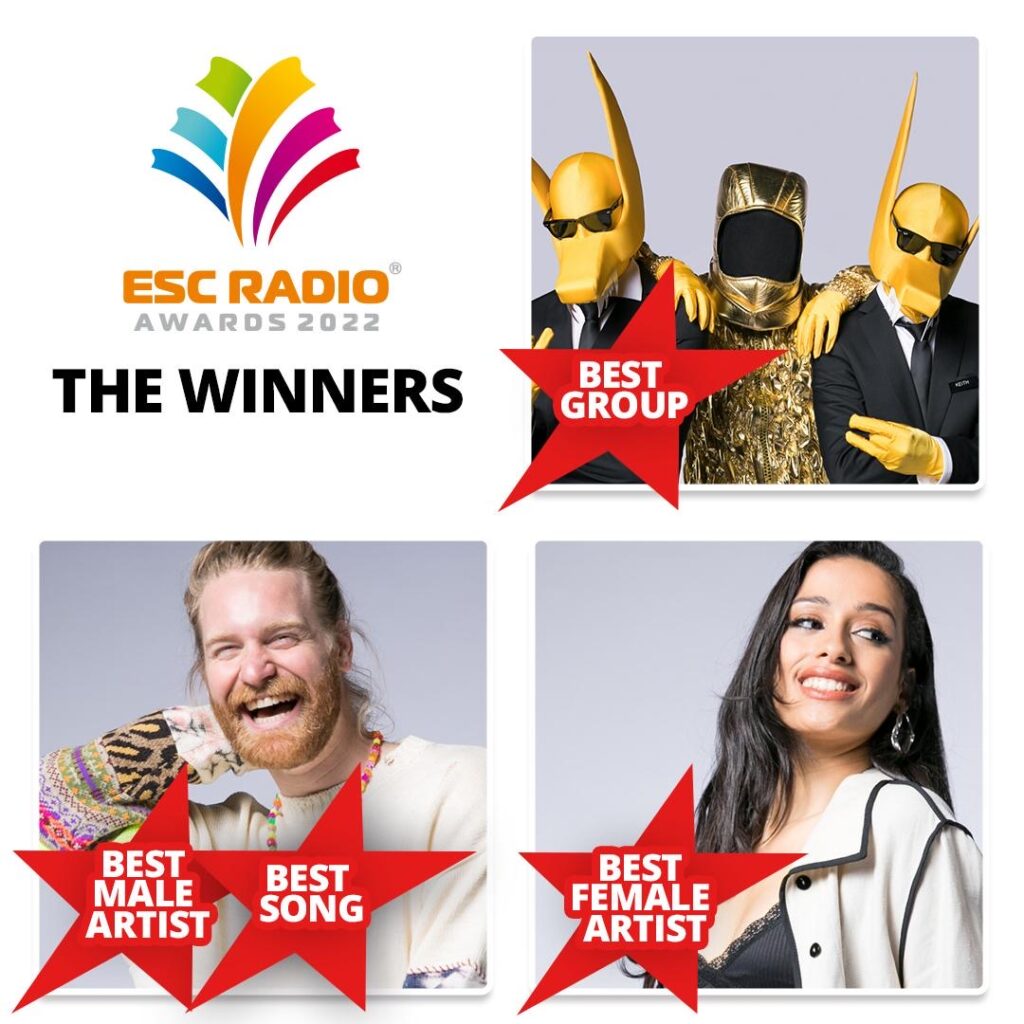 Between June 11-19, listeners, fans and followers had the opportunity to vote for their favourites of the 2022 Eurovision Song Contest. And here are the results:

The United Kingdom scoops double award victory in this year’s poll winning Best Song with Space Man (12.1%), composed and written by Sam Ryder, Amy Wadge and Max Wolfgang, and the Best Male Artist award goes to Sam Ryder with a massive vote of 36.8% – congratulations! It’s the third time for the United Kingdom to triumph in the ESC Radio Awards: In 2013, Bonnie Tyler won Best Song and Best Female Artist, and in 2016 Joe and Jake won the Best Group award. 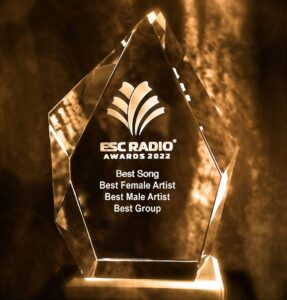 Second place in the Best Song category goes to Sweden’s entry Hold Me Closer (10.6%) by Cornelia Jakobs who also came second in Best Female Artist. Brividi, Italy’s duet performed by Mahmood & BLANCO, follows in third place (9.87%). Two songs that placed on the lower end of the ranking at the Contest in May, Jezebel (The Rasmus, Finland) and Fulenn (Alvan feat. Ahez, France), finished in the Top Ten here.

In the Best Female Artist category the trophy goes to Chanel from Spain. She gained 19.9% of the vote, beating Cornelia Jakobs, Sweden, into second place (17.2%). Konstrakta from Serbia came third. It’s the second time for Spain to win an ESC Radio Award. In the 2007 poll, the four-piece vocal group D’Nash finished on top.

The Best Group voting sees a victory for Norway’s Subwoolfer who gained 16.2% of the vote in this highly-competitive category. Former Award winners from Norway include Alexander Rybak 2009 (Best Song, Best Male Artist) and KEiiNO 2019 (Best Group). Runner-up is The Rasmus from Finland who scored scored 14.5%, followed by Ukraine’s Eurovision winners Kalush Orchestra with 12.0% of the vote.

Congratulations to all winners! We will get in touch with them to hand over the trophies as soon as possible. For the complete rankings of the 2022 ESC Radio Awards, see below please. 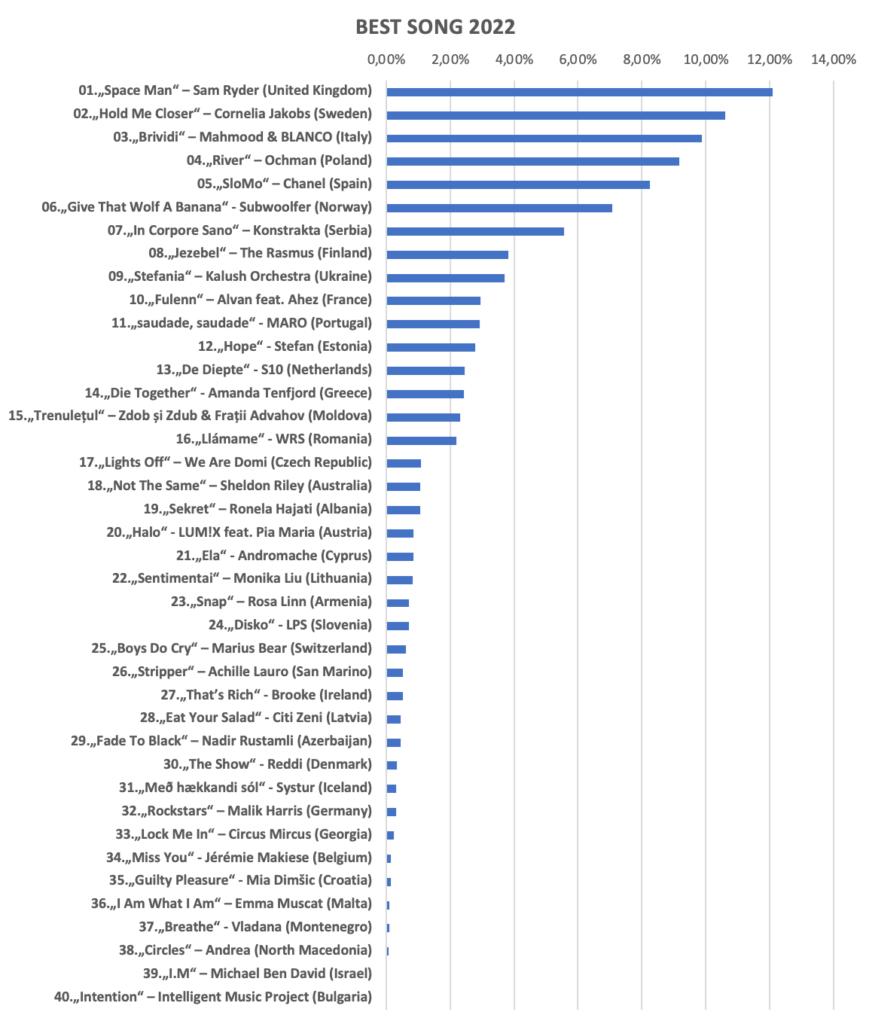 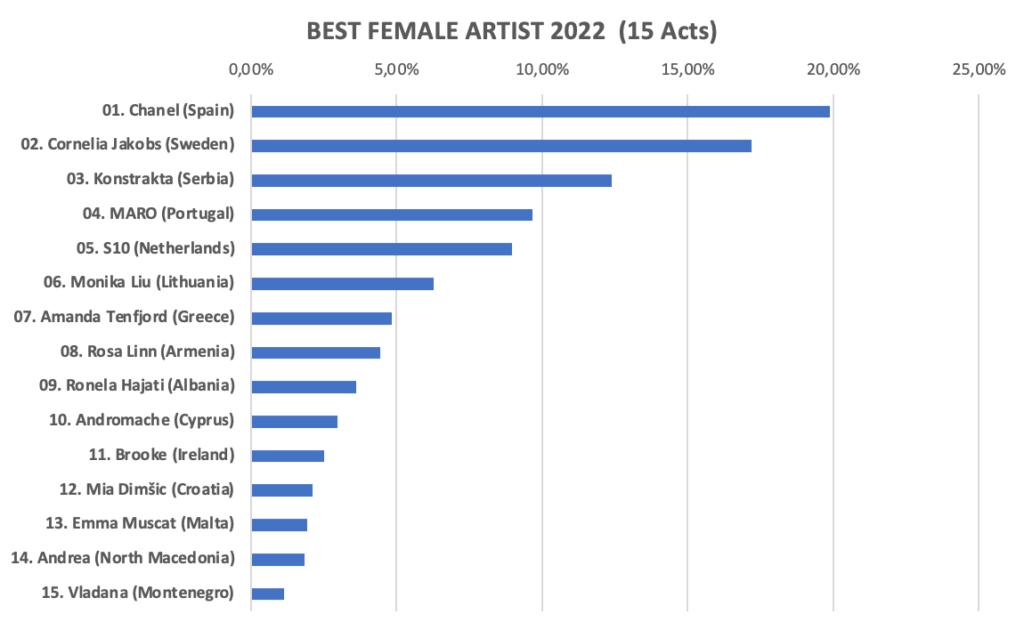